What is Channel-based Audio?

Posted by Iolanda Santos on Sep 23

Would you like to master Spatial Audio? If so, we're here to help you!

We decided to bring you a video series about everything you need to know about 3D audio because you probably have heard about the many names for 3D audio (like immersive audio, spatial audio, among others), but do you know the magic behind it?

There are a lot of new layouts and formats for you to take advantage of and we will give you the basics so you can start mastering and diving into the immersive sound world.

Before getting into the first topic, we want to clarify the most important thing: what is immersive audio? Anytime you listen to the terms immersive audio, 3D audio or spatial audio, it's nothing but the magic of having sounds coming from everywhere - not only from your front, like stereo (and we will get there in a minute) or even around you, but coming from the sides, the front, above and behind you!

Understanding these concepts is the key to integrating 3D audio into your workflow. In the next blog posts, we will give you an overview of all of these new terms, so you can better navigate this new world of 3D sound.

Let's get into it so you can join the adventure 😉

What is Channel-based audio?

To start, channel-based audio: if you want to get some spatial audio, we begin with the one format we all are familiar with - the stereo format, with two speakers, one left and one right. Here, a sound is sent to both speakers and it will be perceived as if it was coming from the center, even though there's no speaker there. Besides this, it's also possible to send more signals to one speaker and then to the other so that the sound is perceived to move from the center to one of the speakers more in one direction than the other.

it's important to note that when working with stereo, we need a 60-degree angle to reach the sweet spot, where one should be placed to get the spatial sound resolution.

At some point, a new speaker was added in between the left and right one -  the center speakers.

And why do we need another speaker? Well, the world is not a perfect place and in spatial audio, that means that not everyone is in the sweet spot. If you go to the cinema and you're lucky to sit in the sweet spot - perfect! But if not - for example, if you are too close to the screen or to the left, that breaks the sound experience because you won't get the same experience as if you were in the sweet spot.

Center speakers work like anchors and allow you to continue having a good sound experience. 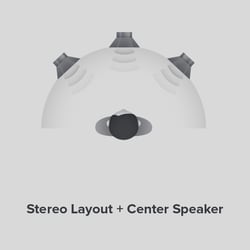 In the following image, imagine that you are in the blue position: you would get sound from the back and right side and you would get great sound, or even if you are on the last row and everything is happening in front of you, you would still get a good experience, but now imagine being surrounded by an array of speakers, like the second image, you would get a much better experience.

Later on, the movie industry also wanted to increase the impact of sounds with lower frequencies on effects such as explosions or earthquakes and that was when the LFE and Sub-woofer made their appearance.

To achieve this, they added larger and more speakers. But the problem is that, at the time, people were using analog sound and that means a very limited dynamic range - if we amplify everything, the background noise will go up and it will affect the dialog.

The best solution was to create a channel only for low-frequencies effects reproduced by a sub-woofer to be played much louder than the other channels to get much more feeling and without affecting dialogs, etc.

The last format is immersive audio (also known as 3D audio or spatial audio) - surround with a height component, not only do you have speakers around, in front, in the sides and in the back but you have speakers above you allowing you to explore sounds coming from above. 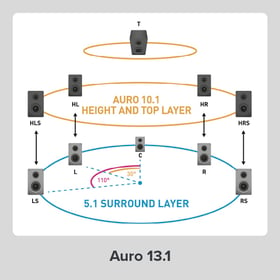 Using immersive formats will provide the sense that sounds are coming from everywhere. For example, 7.1.2 format, which is basically the traditional 7.1 with 3 speakers on the front, 4 surround speakers but with 2 additional channels above, one left and one right, to give the sense of sound coming there.

And that's all for channel-based audio, you can watch the video below to get a more detailed explanation!

Did you know our free eBook "All You Need to Know About 3D Audio" is now translated into 4 new languages?

After the success of the English, Chinese and Japanese versions, Sound Particles brings four more translations, French, German, Korean and Spanish, with the goal of helping professionals around the world to transition into the immersive audio field. With this free eBook, sound enthusiasts will be able to find all the answers they’re looking for in a detailed, complete and easy-to-read guide.

If you want to be the first to get all the fresh news, subscribe to our Newsletter!