We interviewed Jeremy Peirson; Supervising Sound Editor, Sound Designer, and Re-recording Mixer for the Apple+ show See. For this show, Jeremy had very specific challenges when designing the sounds for a future world where mankind has been left blind. We talked to him about how Sound Particles helped him on that journey.

How did you use Sound Particles in See?

I used it in a very realistic way with the human voice. We had a scene where one of our main characters sings and there’s a call and response from the group that’s watching her chanting. The production sound was recorded with a VR mic to add a wider feel, however this also enhanced other on-set noise. The scene contained dripping water and it felt like water was everywhere once we expanded it out to 7.1.

On top of that, they changed the song in ADR, so now the crowd had to sing something different and we didn’t have that crowd anymore. And then, in visual effects they added about a thousand more people. To try to solve this, we went on the stage with a group of 10 actors and recorded 10 passes of the new chant. When we went to the mixing stage and reviewed the recording, the mixer said “I don’t have what I see on the screen. Let me try some stuff with layers, EQs and choruses” and we realized “That’s not it” and I said “I have an idea! Let me go to my office for a little bit, let me get this track and let me spend a little time”.

I took those tracks and I threw them into Sound Particles, using an emitter with around 500 particles. I started by playing with the emitter’s depth to mimic how close everyone was and figuring out the mic position that I wanted. After figuring out the maximum distance the particles could be in the x and y axis, I added slight timing and pitch variances using the random audio modifiers. Figuring out what still sounded real, what pitch to use and with how many particles I could get away with, and make it time aligned and not all sounding like it’s all the same thing. Eventually we came up with the answer and it was like “Oh! There it is!”. That happened a couple of times.

We had another situation where we wanted to hear an entire village start chanting the name of a certain character and there was no production crowd for that. We similarly had 10 actors do 10 passes and we were able to make 10 people sound like 400 or more at distance. The first crowd was done in 7.1 because there were times that we were in the crowd, the other one was off in the distance, so I did more like a LCR approach from Sound Particles, that proved invaluable. It was the only way I could figure out how to do it.

For me, the way I use Sound Particles and why I use it is because I can’t figure out a way to realistically create sound for a scene otherwise, now that I know what it can do there’s only one solution. It’s just a matter of trial and error where I figure out what’s too much and what’s not enough, what’s too close and what’s not close enough. The flexibility Sound Particles provides make it work.

Due to current circumstances, it is not possible to get groups of people together to record crowds or groups singing like you did in See. Do you think Sound Particles could be a way of overcoming this by combining separate recordings within SP?

It’s funny because I hadn’t really thought about using Sound Particles for group crowd type situations. In a way it makes sense because a few of my peers were all talking about how we are going to record group. I have friends who are actively trying to figure out how they are going to do this right now. However, there’s a new problem which is recording all these individual actors.

There’s been some discussion about recording some of the stuff on a very large Zoom call with up to 20 actors, so that everyone can communicate and hear what everyone else is doing, but everyone is recording independently at their place.

This creates another problem, instead of having 20 people all together in a stereo file, you have 20 recordings at various levels, with various recording and acoustics properties. They all may need fixing individually and you need to figure out how to make it all work from 20 individual tracks, instead of a natural composite of two, and you might have many of those situations. If you can get the audio recorded and cleaned up, then put it into Sound Particles, space it out with randomized placements and slightly randomized timing and pitches, it would be possible to do it! I didn’t think of that, but it makes a lot of sense. I’m actually going to suggest that to a friend of mine.

It’s great to hear how professionals like yourself use the software. There are so many possibilities with Sound Particles, it’s good to hear how individuals are using it in different ways.

It’s an interesting audio tool, over the years I’ve used it in situations where I don’t know how I’m going to create or enhance a certain sound, I’ll start by making particles and throwing sounds in and experimenting. Fortunately, certain aspects of how the software works will trigger an idea, one approach will inform another, or trying to find a solution in a certain way creates a happy accident I hadn’t thought of. Thank you for making such a cool product! 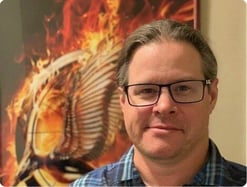 The full interview with Jeremy will be released next Monday. We will talk about Jeremy's career, the state of the industry, his experience working on See and much more.