Getting to know the mind behind Sound Particles

Posted by Iolanda Santos on Sep 22

For Sound Particles, it all started way back in 2005 when this company was nothing but a dream in Nuno Fonseca's mind, a small idea that was too big to ever be brought to fruition.
Here's the great part about this story - how the small start-up that could went from being the brainchild of a university professor to developing a software being used in all major Hollywood studios, being integrated in AAA video games, and being an indispensable tool for a lot of sound professionals.
In this interview, Nuno tells us all about his career path, the growth of Sound Particles and his passion for 3D Audio.

How did your interest in sound start?

I always loved technology and music. I was around 11 years old when I asked my parents if I could have a keyboard and music lessons. And a few years later, I recall doing one of those tests about which are the best jobs for you, and I got the exact same score for engineering and music.

How did that interest end up becoming a profession?

At that time, there weren’t any university degrees in Portugal regarding audio (only classical music), so the decision to do engineering was more or less obvious. Nonetheless, during my university years I always kept exploring both fields: at my university I was taking all the sound related classes that I could, like acoustics, magnetic recording, signal processing, and at the same time, I was attending some music classes at the music university (orchestration, music analysis, music composition).

After university, I returned to my hometown and started a job at an IT company. But I wanted to continue to explore music and sound, so I decided to become a university professor to allow myself time for my crazy research projects in audio. And after a few adventures (like writing a book about audio, or doing a singing voice software), Sound Particles happened.

Sound Particles is a small start-up with headquarters in a small city in Portugal. How did this software go from Leiria all the way to Hollywood?

Around 2005 I noticed that the most interesting visual effects I was seeing in movies used particle systems, a computer graphics technique where you create thousands of small points to recreate fire, smoke, fairy dust, etc., and I thought it would be interesting to do the same with sound, creating thousands of small sounds that together created fantastic soundscapes. But that was only an idea…

In 2012, I had finished my PhD and since no one was exploring that concept of particles systems for sound, I decided to start creating the Sound Particles software in my free time.

In 2014, I was going to Los Angeles for a conference and I decided to send 5 or 6 emails to Hollywood professionals, talking about the concept of Sound Particles and saying that I would be in town in a couple of weeks. The first reply was from Skywalker Sound, that invited me to do a presentation there, and within 6 months I ended up doing presentations at Warner Bros, Universal, Sony, Paramount, Fox, and later on at Disney and Pixar.

What do you think are the biggest differences between creating Sound Particles in Portugal, as opposed to creating software somewhere else?

The world is global, and anyone can create software anywhere. For us, it is important to be in touch with Hollywood professionals, and that means a lot of traveling. Of course, that relation with Hollywood would be slightly easier if we were in LA, but Portugal has other advantages – for instance, if I take more than 7 minutes to go from home to the office, I think the traffic is horrible…

Now seriously, I think that creating a new business is always hard. It doesn’t matter if it's a coffee shop, a hair salon, or a 3D audio software company. And it doesn’t matter if it is in Portugal, Los Angeles, or Kathmandu. Problems appear, one after the other, and you need to handle them, one after the other, and if you are lucky you will be able to stay in business or even grow it. 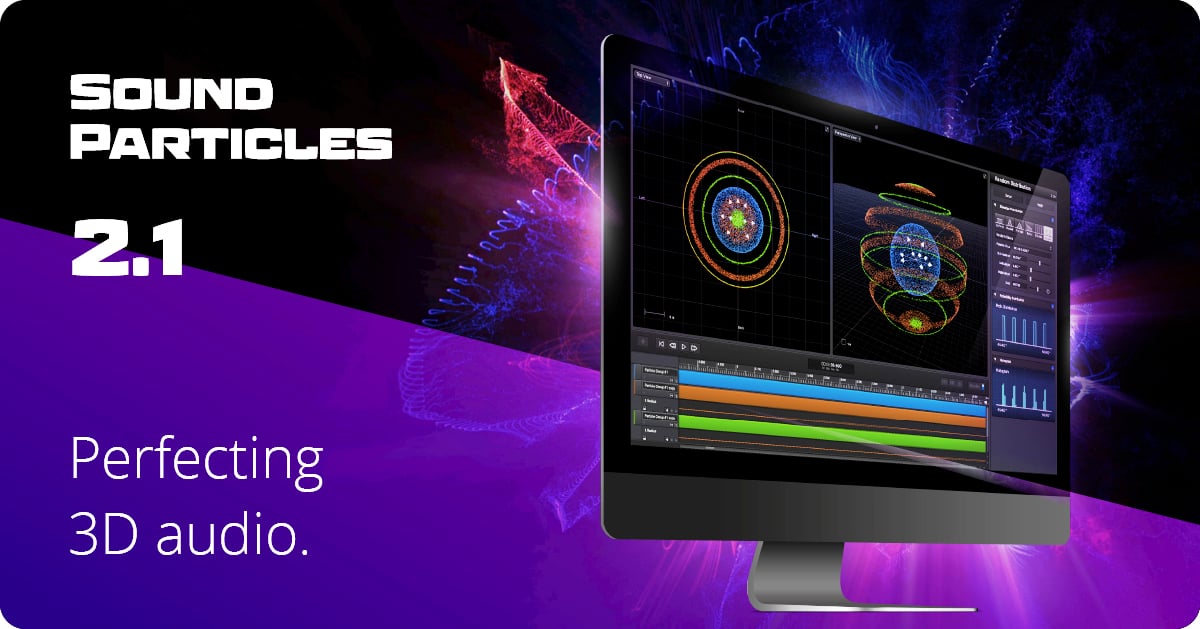 How does the Sound Particles team work? What's a usual day like at the office?

We have 2 major teams – the team of software development, and the team that handles the business side (sales, marketing, design, paperwork).

The usual day starts with a daily meeting with each team to discuss yesterday’s work, the issues, and what is planned for today. And then, I usually spend half of the day jumping around between people that may need my attention – some developer that wants to discuss a specific feature and how to implement that, the marketing team may need to discuss the new ad or campaign, the designer may want my feedback on a new screen for Sound Particles, some testers want to discuss a new bug found on the software, etc.

And then, if I’m lucky, I will have some time to do my work – write some user stories about the new features of the software, write some prototypes to see how to implement a feature, look at the company numbers, outside calls, etc.

Coming into the industry as a little bit of an underdog, how welcoming was the industry? How competitive did you find it?

I was surprised with the kindness of the industry. When you think about Hollywood, you think about a very closed community, and yes, you need to be on the list to enter a studio, with x-ray detectors and passport control, but it was wonderful to see the kindness of all sound professionals. In many cases, I would send them an email, and even without knowing me, they would invite me to come see them and discuss Sound Particles with them.

And then, even the relationship with other software companies is great – we spend our time together crying about the issues of working in this audio software industry.

I don’t know if Sound Particles is a success story yet or not, but it is for me… For someone that loves technology, cinema and sound like I do, it has been a fantastic ride – going to the studios, meeting these fantastic professionals, and seeing something that you create being used in major Hollywood productions, it's FANTASTIC. Even if Sound Particles were to close its doors tomorrow, it was the best possible ride for a sound nerd like me.

If you had the chance to change anything about the process of creating Sound Particles so far, what would it be?

I should have started Sound Particles sooner… and ignore that little voice telling me that Hollywood studios would not use a software created by someone from a small town in Portugal. 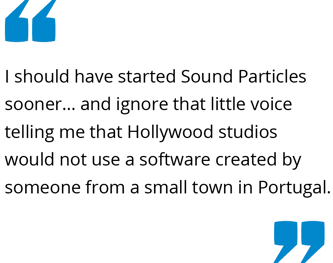 What has been something that happened along the way that completely surprised you?

Everything has been a fantastic ride… I still recall my first trip to Skywalker Ranch, or entering the Steve Jobs building at Pixar, or crossing the campus at Stanford to give a talk, or entering Disney Studios by the most distant gate just to be able to cross the campus, or seeing Steven Spielberg on the same ceremony where we were also nominated.

But what surprised me the most, like I mentioned, was the kindness of top audio professionals. They didn’t know me but were still interested in knowing what I’ve been doing with a crazy sound technology.

What do you think was the biggest breakthrough in the industry in the last 10 years?

I think 3D sound was the biggest breakthrough, although its impact will only be fully understood in the next 10 years.

I was probably 12 when I listened to a live orchestra for the first time. It was a place with a great acoustics, and the orchestra started with “The Hebrides” Overture from Mendelssohn. Being fully immersed with those strings sounds definitely marked me for life, and that is the type of spatial experience that I want audio to be able to provide to people.

What do you think is the most valuable piece of advice anyone from the industry has given you?

I recall multiple talks, in person or by email, with people like Randy Thom, Richard King, Paula Fairfield, Niv Adiri, Mark Mangini, David Farmer, Kyrsten Mate, Walter Murch, among many others. And sometimes, even more important, it's not what they tell you, but what they ask you (or why they ask you).

In the end, each advice that I received was like a brick that I could use to help build a road for the journey, and it all comes to work, work, work, and following your dreams.

What makes you really excited about the future in the sound world?

Yes, I know I am repeating myself, but I always had a passion for 3D sound. For me, listening to noises playing over a 3D audio setup may sound as good as an orchestra playing Hans Zimmer (and I like Hans Zimmer). But now imagine, using 3D sound with music…

We just released a new eBook on this topic actually, which I'm really excited about. This new eBook is one small contribution to bring more people into 3D sound – and it’s with a fully selfish intention: convincing others to adopt 3D sound, so that I can experience more 3D sound content. 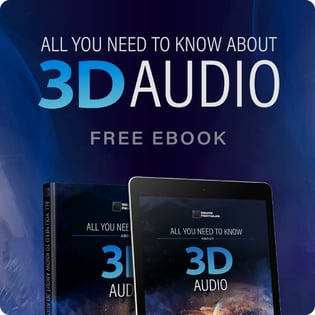 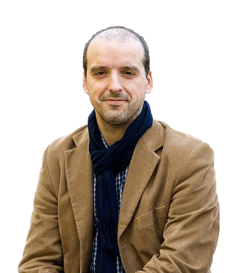 Nuno Fonseca (PhD), is the founder and CEO of Sound Particles company, and was the creator of Sound Particles software, a 3D CGI-like audio software used in all major Hollywood studios in productions such as “Star Wars 9”, “Frozen II”, or “Game of Thrones”.

He is a member of AES, SMPTE, CAS, MPSE, AMPS, and member of the Audio Engineering Society (AES) Technical Committee on “Audio for Cinema”.