Posted by Iolanda Santos on Oct 28

We created two immersive soundscapes that are spooky, scary and cool, but above all, they are able to transport us somewhere else for a minute.

And you might think a minute is not that much time, but a lot can happen in a minute! You'll feel it. Check out the immersive experiences we created, and then check out exactly how we did it!

This Halloween is definitely a special one - we're abiding by different rules to keep everyone safe, so finding alternatives to celebrate this event is a must, in our eyes.
While we're definitely missing the fact that we can't hang out and have a movie night with everyone at the office, that doesn't mean we can't celebrate the spookiness of Halloween anyway! And what's better, we wanted to share that with you.

Sound Particles is a 3D audio software that simulates a virtual 3D space – imagine a computer animation software but specific for sound: you start with an empty endless space, add some moving sound sources, and capture the sound with moving virtual microphones.
One of its unique features, is the ability to use particles systems to generate thousands of sounds around you.

What that allows us to do is create very complex soundscapes in a matter of minutes - which gives for some cool and interesting content!

The witches are here... and they're not alone Here's how you can recreate this first soundscape:

1. Create a microphone track and place it right in the middle of the 3D Space. Choose the number of channels of the mic according to the system you want to play the soundscape with. 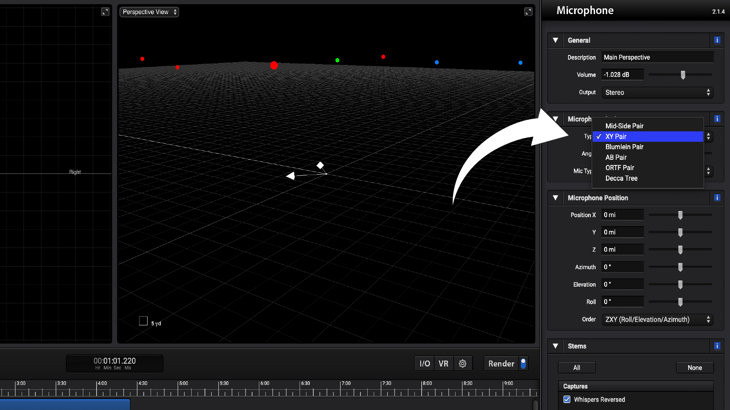 2. Create a stereo audio track and import the sound of an ambience with rain and wind. Place both particles further away from the microphone (e.g. half a mile to the back and to the sides).

3. Create a mono audio track and place it centered with the microphone, and set its y distance to half a mile. Import a low rumble sound.

4. Create a particle group with 50 particles, change it to a rectangle and set the depth and width to one mile. Import the sound of owls. Add a Random Delay between one and two minutes and a Random Pitch of 5 semitones up and down.

5. Duplicate the Owl track (delete the owl audio file you imported) and import a few ambiences with thunders. Delete the Random Pitch and add a Random Gain of 12 dB. Set the Start Time to 7 seconds.

6. Add a Particle Emitter with a rate of 0.33 and a duration of 100 seconds. Increase the Main Radius to half a mile, import the sound of a church bell and add a small Random Delay (E.g. half a second). Set the Start time to 40 seconds.

7. Add the Rotating Ring preset, change the radius to half a mile and import sounds of cinematic wooshes, rises, etc. Set the Start Time to 55 seconds. 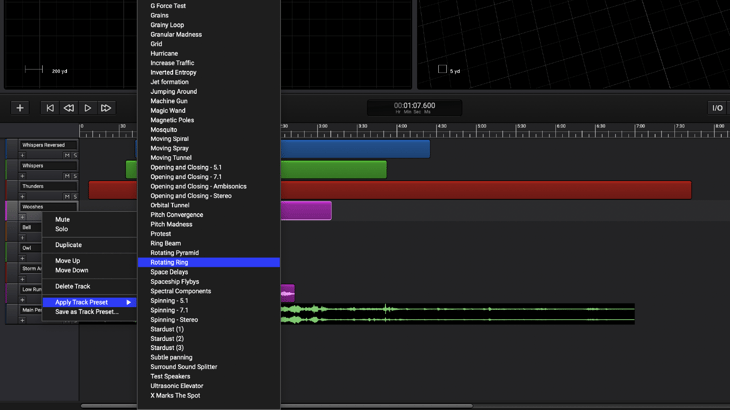 8. Grab files of people whispering (10 to 20), reverse them and add reverb using a DAW. Go back to your project and add a battlefield preset and change the number of particles to 30. Add the whispers you edited/modified and set the Start Time 40 seconds. 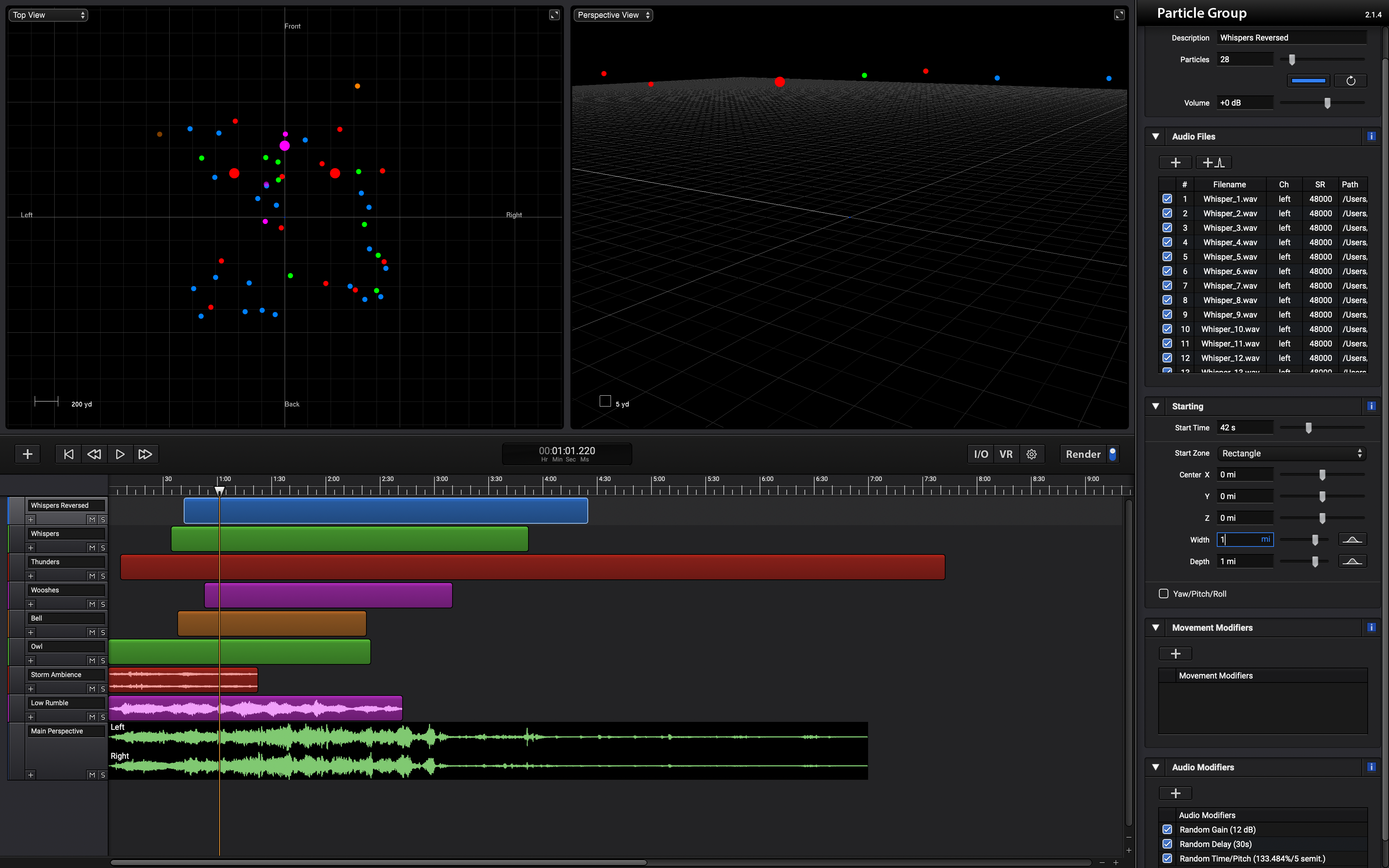 10. Render everything and adjust the individual volume of the tracks. 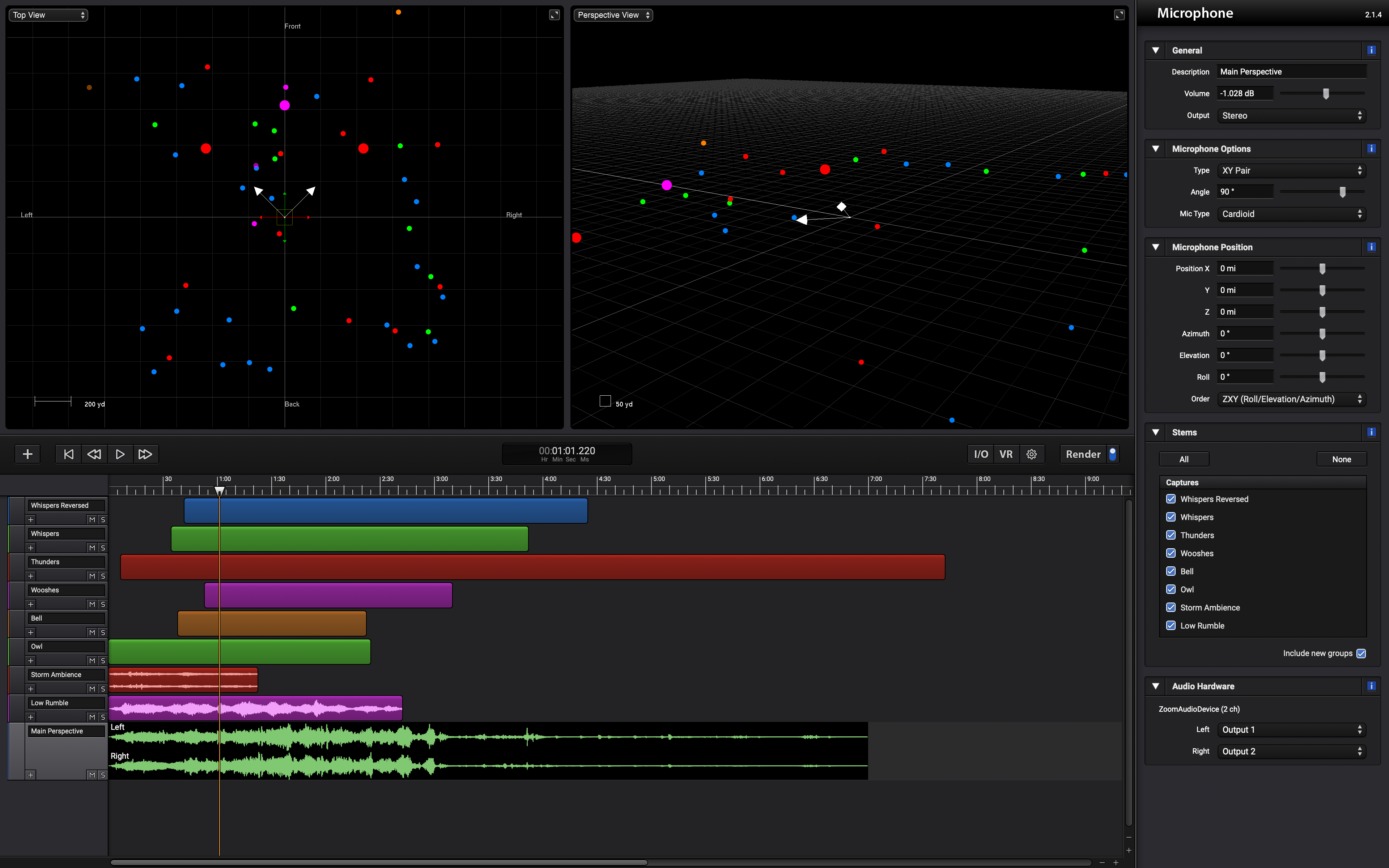 If being transported into a spirit world by witches isn't really your thing, we got something else up our sleeve that will be sure to give you goosebumps!

The wolves are after us! Here's how you can recreate this second soundscape:

For this soundscape we wanted to create some elements like stormy weather, some crows flying away and some werewolves around us…

1. Create a microphone track, with the desired output type. Automate the microphone position in order to move it into the center of the soundscape. Automate it’s azimuth too in order to give some additional movement in the beginning. 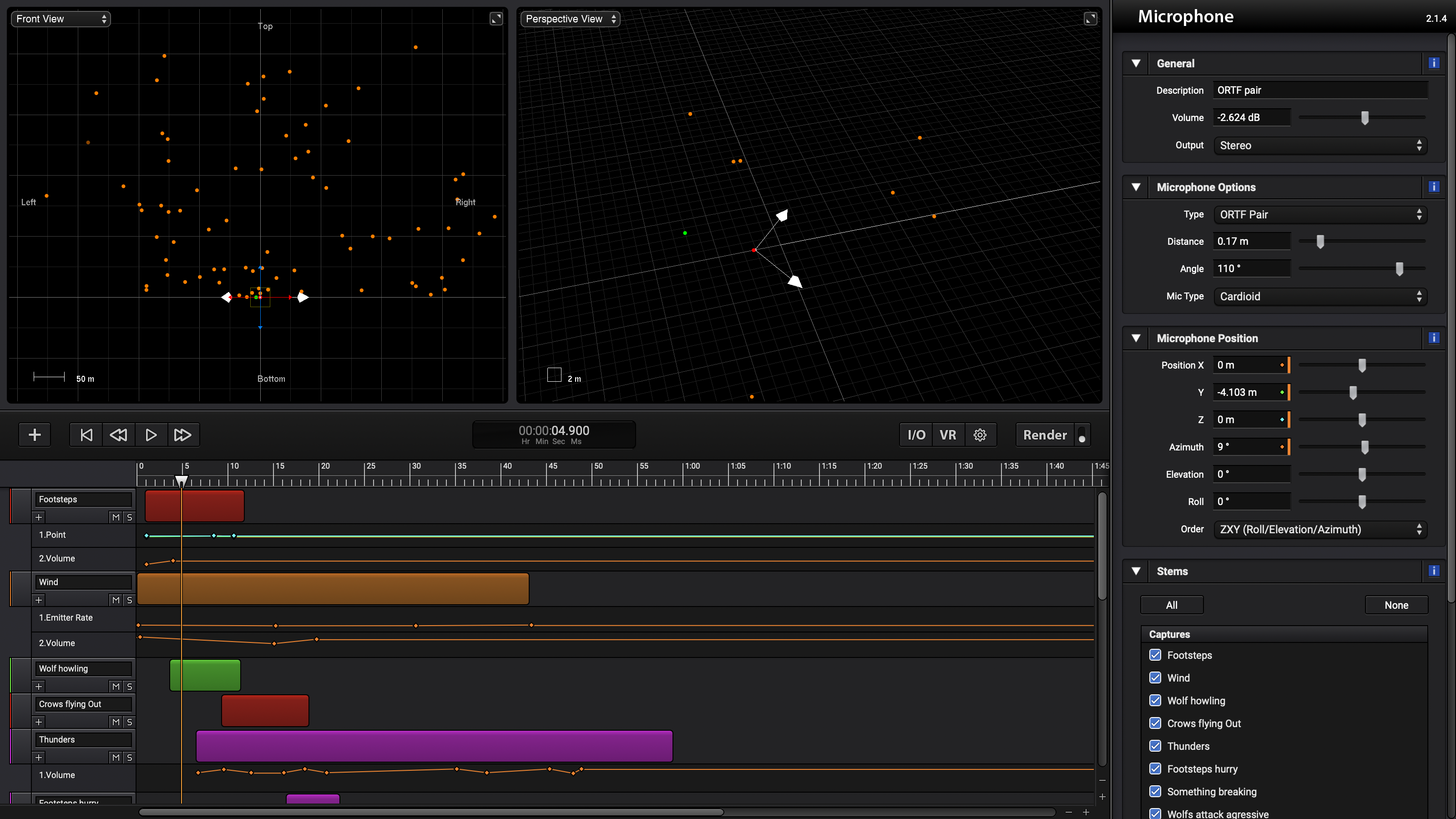 2. Add a particle group track with two particles and import a sound of footsteps, then automate the group position to go along with the microphone movement. Use the granular audio modifier to use a random portion of the audio with the footsteps.

3. Create a particle emitter track, import a bunch of wind sounds into it and choose a sphere to be the start zone for the particles. Customize the radius random distribution to behave as a ramp in order to have more particles being reproduced in the farfield and less near to the microphone. Add some rotation velocity to the particles to give a sense of movement. Finally add some audio modifiers, like random delay, random filters, granular too and random time/pitch to generate more variations between each particle.

4. Create a particle group with only one particle, then import some sounds of howling wolves. Choose the desired start time for this particle and add some rotation velocity to the particle. Add a granular modifier, to randomly generate a portion of one of the sounds imported to the track, so the wolf howl result can sound differently each time you want to make a new recreation of this soundscape.

5. Add the Flying Out of the Cave particles preset and import some crow sounds to simulate a group of scared crows passing near the microphone. Add some random gains to the particles and, in this case, delete the random filters that came in this preset.

6. Duplicate the track with the wind sounds (delete the wind files) and import some thunderstorm sounds to it. Then you can automate the volume of the emitter track to give more presence and darkness in some specific moments of this soundscape. Set the Elevation distribution of particles to be above the microphone with a minimum value of 15º for example.

7. Create a particle group with ~16 particles and add some hurried footsteps sounds to it. Adjust the start time of these particles so they appear after the crows sounds. Add some straight line velocity, to move particles behind the microphone from right to the left.

8. Create a particle group and import some sounds of metal hits and doors. Put it 30/40 feet away and add a granular audio modifier and a random time/pitch to get a random sound of an object breaking suddenly…

9. Duplicate the track of the thunderstorm sounds, replace the imported sounds by some aggressive wolves and zombie snarl sounds. Change the start zone to be a circle (inside) distribution and set the radius to be between 3 to 130 feet from the microphone, this way all the sounds will be at the same height of the microphone, instead of being above.

10. Duplicate the previous track created and now replace the wolves and zombie sounds with a less aggressive growl and breath sounds, to add a complement layer of sounds to the werewolves attack... 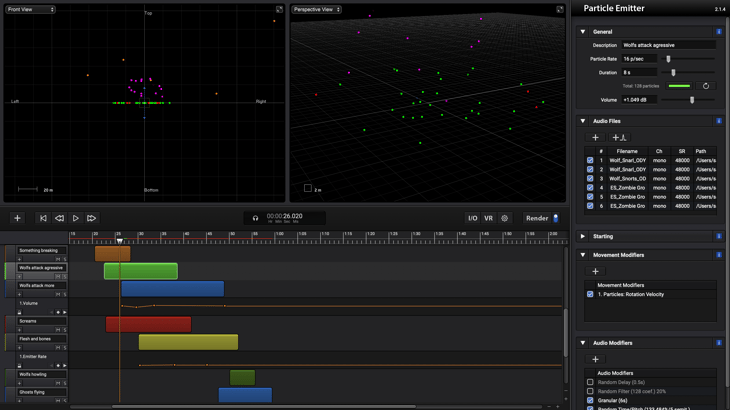 11. Create a particle emitter with a start zone to be a circle (inside), and place its center near the microphone. Import some screaming sounds, add some random gains, random delays, apply a granular to set random parts of the imported files to the particles, and finally add random time/pitch with ± 3 semitones for subtle differences in the screams generated...

12. Now, create a particle emitter to add some flesh and bones sounds during the werewolves attack... Set the start zone to be a point near the microphone, add some straight line velocity to the particles to gradually attenuate the sounds as they move away from the microphone. Add some audio modifiers to achieve more diverse results for the particle created.

13. Duplicate the track of howling wolf and set it to have ~20 particles. Change the start zone to be a circle (inside) and set the radius to be far from the microphone, like 400 to 1600 feet away from it. 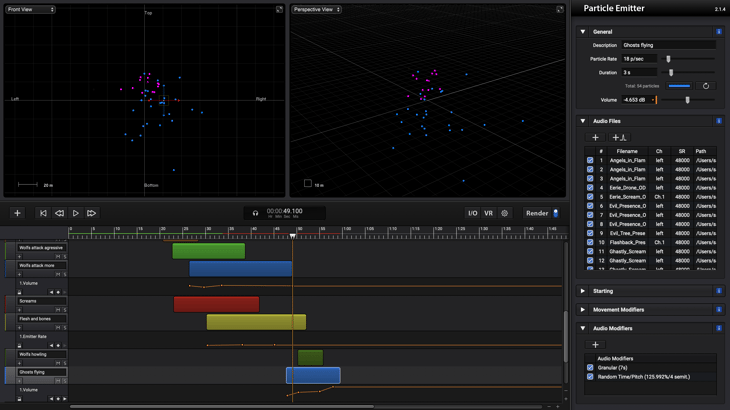 14. Finally the ghosts will fly around the listener... Add a track with the “Flying Objects” preset, import some ghost effects to it, set the start zone to be a sphere (inside) in order to have sounds more close to the microphone and others more distant. Give some rotation velocity to the particles and add a granular and a random time/pitch modifier as well.

15. Last but not least, set a batch processing of 5 runs with every track, select the output folder where you want to place the renders, run the batch, and let's hear which one it is the scariest... 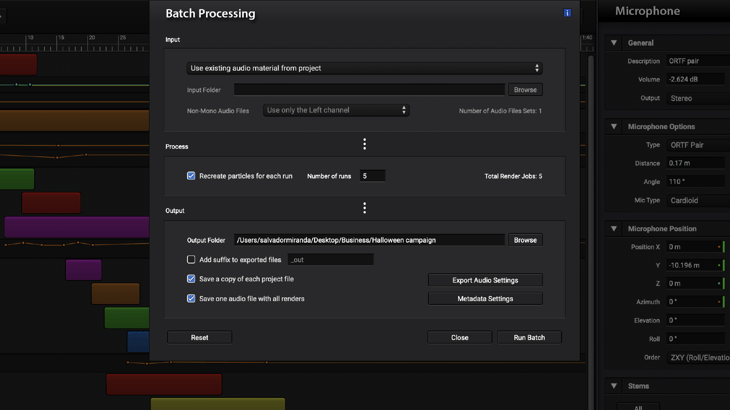 We hope you enjoyed these short immersive experiences we created with Sound Particles, and that you feel inspired to create your own 3D audio soundscapes!

Sound Particles is witch-ing you a very Happy Halloween! 🎃